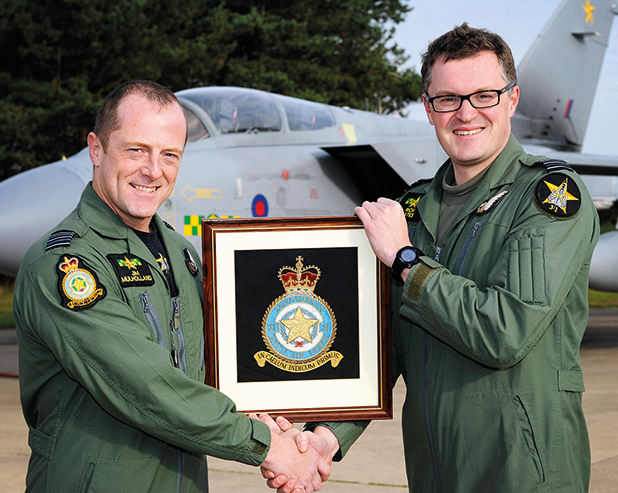 It was a fitting day on which to hand over command as the Squadron celebrated the 97th anniversary of the Goldstars formation at Farnborough on 11 Oct 1915. Wg Cdr Yates inherits a Sqn who are once again in the early stages of preparation for Op HERRICK, and are currently on point for any contingency that may arise.

Wing Commander Jim Mulholland said[quote-full] "My two years in command has been an absolute honour and a pleasure, with a tour in Afghanistan, two North America detachments, a detachment in Gibraltar, and more recently Ex SHAHEEN STAR in the Middle East. My last sortie culminated with a high tempo, high workload airfield attack where planning and teamwork are crucial, and it is the importance of that teamwork that I will take away from my tour in command of 31 Sqn. I have had the luxury of a first class engineering team who have proven themselves in every environment around the world by achieving their goal to keep the aircrew flying, who in turn have always delivered 100% of the task. I have been lucky enough to work with a team of aircrew and engineers, who have invariably gone above and beyond what is required of them, and as a collective we have ensured that 31 Sqn has continued to deliver sustainable improvement and performance at the leading edge of the front line. To the new OC 31 Sqn, I wish him luck, and I know that he is taking over a team of people who are second to none, whom I am in no doubt will continue to support him in the same manner as they have me throughout my tour. In Calum Indicum Primus."[/quote-full]

Wing Commander Yates joined the Royal Air Force as a University Cadet and studied Aeronautical Engineering at the University of Salford from 1989-92. Following graduation he progressed through officer and navigator flying training resulting in posting to his first operational tour with 31 Squadron who, at that time, were based at RAF Bruggen in Germany.

Wing Commander Yates now returns to 31 Squadron for the fourth time in his career and the third time based at RAF Marham. He said "It is a great privilege to take command of 31 Squadron RAF, who are known as the GOLDSTARS. Unusually for a new "Boss" I have a lot of history on the Squadron as this is my fourth tour with the GOLDSTARS and third at RAF Marham. Similarly West Norfolk is an area I know well and enjoy having made it my home for the last decade."