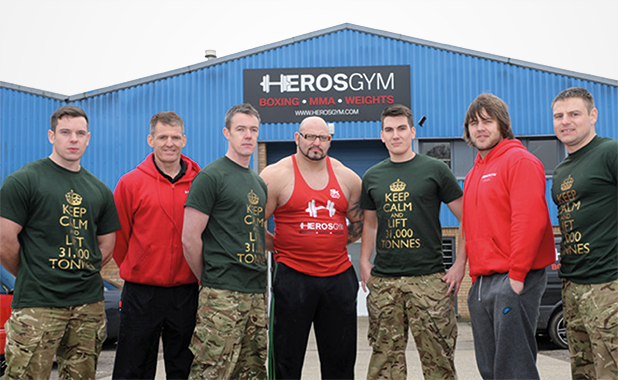 31 Squadron from RAF Marham are due to deploy to Afghanistan in the next few weeks as they take over from IX(B) Squadron patrolling the skies in support of UK and Coalition troops as part of Operation HERRICK.

Whilst in Afghanistan the Squadron have set themselves another tough challenge to raise money for two local charities, Scotty's Little Soldiers and Tapping House Hospice.

It was SAC's David Russell and Jase Newton who came up with the idea of the Squadron challenge to lift a total of 31,000 tonnes during their 'down time' whilst deployed to Afghanistan. They discussed how this would be achieved and decided on a special strong man endurance challenge and some intense gym work such as weight lifting and body weight exercises with the weight of each repetition multiplied by the number of reps to give a total for that set. These will then be added together for all the specific exercises in a given workout to give a work out total. The daily individual totals are accumulated into a rolling Sqn total towards the target.

The idea was put forward to Officer Commanding 31 Squadron, Wing Commander Rich Yates who thought it would be good to challenge another section to participate so he threw down the gauntlet to the personnel of Base Support Wing, back at RAF Marham, and challenged them to match them ton for ton!

Wing Commander Yates said[quote-full] "Physical fitness, strength and conditioning are very important attributes to all in the RAF, in addition to all the well-known health benefits it also helps us adjust to the rigours of our operational deployments to Afghanistan."[/quote-full]

To add to the individual training, we have set ourselves an impressive team goal and to use the chance to raise money for excellent local causes. To put this challenge into perspective 31,000 tonnes is around the weight of 3,500 London Buses. Through focused teamwork and the efforts of our highly motivated people, I know the Squadron will be able to beat this target and am looking forwards to doing my share of the heavy lifting.

To get themselves prepared for the challenge ahead a group of 31 Squadron personnel were invited to Heros Gym in Kings Lynn to do some training in their state of the art facility. Whilst there, they were given some top tips by strongman Simon 'The Legend' Flint who had heard about the challenge through the gym and offered to give the guys a training session.

Anyone wishing to sponsor the Squadron can do so at the following fundraising sites: