An RAF navigator has been awarded for heroism under fire while protecting civilians from attack by Gaddaffi-regime forces in Libya in 2011.

It is the second time the airman, now serving with the RAF's iconic 617 'Dambusters' Squadron, has received the honour from the French government; 2 years ago he received the same decoration for bravery on operations in Afghanistan when flying on a 3-year exchange posting with the French Air Force, operating the 2-seat Mirage 2000D attack fighter aircraft. 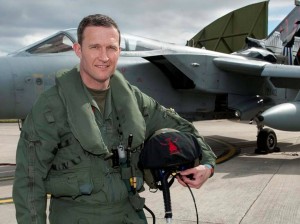 
Flight Lieutenant Abson said: [quote-half-right]"I am honoured and humbled to be recognised in this way, although at the time I was just doing my job. In a way it's a tribute to the close bonds formed between the RAF and the French Air Force in Libya and Afghanistan where we were, literally for me, fighting side-by-side.[/quote-half-right] [quote-half-right]"It was a tremendous experience for me to serve with our French allies. I think we all learned a lot from each other which can only benefit both nations if we are called on to conduct future joint operations."[/quote-half-right] 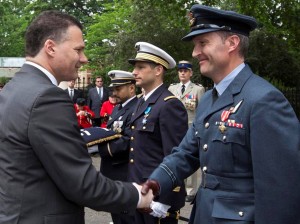 He was presented with the award at a ceremony in London's exclusive Carlton Gardens, a former residence of France's wartime leader-in-exile General Charles de Gaulle.

The award was bestowed by Antoine Anfra, the Ministre Conseiller of the French Embassy, at a ceremony 73 years to the day from that on which de Gaulle made his historic appeal to the French people to fight on in a speech broadcast by the BBC on 18 June 1940.

[quote-half-left]"I am delighted to be awarding Flight Lieutenant Abson the Cross of Military Valour with Bronze Star. This prestigious decoration was created in 1956 to honour individual defence personnel who have accomplished brilliant feats outside national territory in overseas missions and operations.[/quote-half-left] [quote-full]"In 2011, Flight Lieutenant Abson took part in the Libya campaign. It was his feat of arms during this campaign which has earned him this decoration today. It is a pleasure and honour for me to award him this insignia, which testifies to the gratitude of the French Republic, which he served with courage."[/quote-full]

It goes on to say: 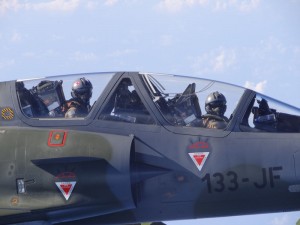 [quote-half-right]"On 28th March, Flight Lieutenant Abson led a patrol of 4 Mirage 2000D and 2 Rafale aircraft with distinction. During a night-time bombing mission south of the Libyan capital, Tripoli, he successfully destroyed high priority enemy buildings with several laser-guided bombs while under intense threat from ground-to-air defences.[/quote-half-right] [quote-half-right]"He further showed his skill on reconnaissance missions on the 14th and 17th June when he destroyed 6 Libyan military vehicles that were about to harm the civilian population.[/quote-half-right]

"Thanks to his great tenacity and remarkable determination under enemy fire he directly contributed to the success of the coalition forces.

"Because of his courage, his sense of responsibility and his selfless acts, he should be held as an example for our nation and he merits the award of the Cross of Military Valour with Bronze Star."