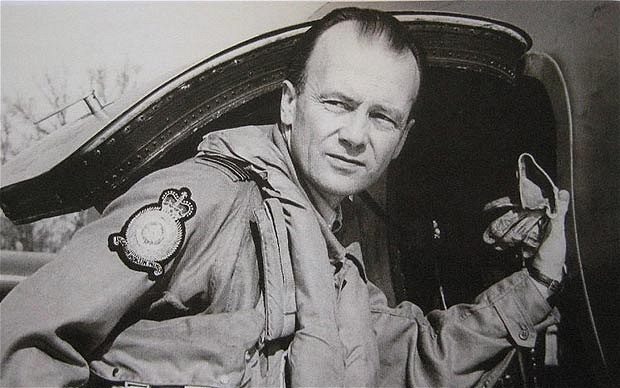 Air Commodore Peter Scott, who has died aged 87, flew 40 combat missions with the USAF during the Korean War and played a key role in the introduction into RAF service of the Javelin all-weather fighter.

Scott was an experienced fighter pilot, and was half way through a two-year exchange appointment with the USAF when, in May 1951, he left for Itazuke in southern Japan to join 182nd Fighter Bomber Squadron flying the F-84 Thunderjet. The unitâ€™s main task was to support ground forces in Korea attacking targets in the front line.

A light aircraft marked the targets with smoke before Scott and his fellow pilots, flying at 500mph and at very low level, attacked with napalm (which Scott described as a 'horrible weapon') or with bombs and rockets delivered in a steep dive. The North Koreans provided stiff resistance, and anti-aircraft fire was intense ; Scott and his colleagues faced the additional hazard of wires spread across the valleys. After an attack, the aircraft climbed high to cross the 130 miles of sea back to their base. When loaded with bombs, the single-engine Thunderjet needed assistance on take-off. The extra thrust was provided by two Jet Assisted Take Off bottles (JATO) attached to each side of the fuselage. The rockets were fired as the aircraft reached 100mph. Scott observed: â€œIt was a strange feeling knowing that, if it didnâ€™t work, we would go off the end of the runway at high speed with a lot of very nasty things hanging from our wings.â€

Scott also escorted long-range bombers attacking the North Korean capital, Pyongyang. Extra fuel was carried in two external tanks which were mounted under the wings and jettisoned into the sea once they were empty .

On July 30 a massive fighter-bomber raid against a large ordnance factory complex near Pyongyang was mounted by nearly 500 aircraft. It was Scottâ€™s 40th and final operation, and he attacked with napalm before returning to Itazuke. The mission earned him a fourth clasp to the US Air Medal.The son of an RAF officer, Peter Howard Langston Scott was born on February 27 1924 at Bournemouth. On leaving Harrow, he joined the RAF and trained as a pilot in Florida . He returned to England just as the war was finishing and joined a Mosquito night fighter squadron.

After three years Scott trained as a flying instructor and converted to the Meteor jet fighter. He went to California in 1950 to join the USAFâ€™s 82nd Fighter Interception Squadron on a two-year exchange scheme.
On the morning of January 8 1951, en route to Barksdale, Louisiana, an engine on Scottâ€™s Thunderjet caught fire. The canopy failed to jettison, so he was unable to eject. He managed to open the canopy manually, turn the aircraft on its back and fall clear. He had only just opened his parachute when he landed in the swamp region of Redchute Bayou, which he knew was infested with alligators. He climbed into a tree, remaining there for two hours before being rescued.

On his return to Britain, Scott flew trials with the All-Weather Squadron of the Central Fighter Establishment, and was awarded an AFC. In 1952 HQ Fighter Command arranged for him to spend two years at the Gloster Aircraft Company, where he was the RAF liaison pilot responsible for testing the new delta-wing fighter . For this work he was awarded a Queenâ€™s Commendation for Valuable Service in the Air.After a spell at the RAF Staff College, Scott spent three years as Personal Staff Officer to the Minister of State for Air, initially George Ward and then Julian Amery. This involved arranging numerous overseas visits, including meetings with Archbishop Makarios to discuss the future of the Sovereign Base Area in Cyprus.

In November 1962 Scott took command of No 31 Squadron at Laarbruch, on the Dutch-German border. The squadronâ€™s role was low-level photographic reconnaissance, and Scott moulded it into a very efficient unit. He twice led No 31 to victory in the Sassoon Trophy, the annual competition for reconnaissance squadrons based in Germany. Extremely sociable, he enjoyed every facet of RAF life overseas, and his relaxed and approachable manner put everyone at ease, irrespective of their rank.

After promotion to group captain, he attended the Nato Defence College in Rome and, on completion of the course, remained on the staff for two years as the RAF representative. In 1969 he returned to a post at the Central Reconnaissance Establishment, responsible for the RAFâ€™s strategic reconnaissance and radar intelligence gathering squadrons, an appointment that allowed him to continue flying the Canberra. On promotion to air commodore in 1972, Scott went as air attachÃ© to Paris . Intelligence gathering was a significant part of the job. On one occasion, the wife of a French general remarked to Scottâ€™s wife during a game of bridge that her husband would miss their wedding anniversary since he had urgent business in the Pacific region. Scott was able to alert the MoD, as a result of which an RAF strategic reconnaissance aircraft was deployed to the area to obtain air samples following the explosion of a French nuclear device.
After two years at the MoD responsible for air defence policy and operations, Scott retired in 1977. For nine months he worked as personal defence adviser to Winston Churchill, grandson of the wartime leader .
Scott was an outstanding sportsman, excelling at squash, tennis and skiing, and represented the RAF in each discipline. He was appointed the RAFâ€™s Director of Sport and Recreation (a retired officerâ€™s post), serving for 12 years .

Peter Scottâ€™s first marriage, to Barbara Guest, was dissolved in 1967. His second wife, Pip, died in 2007. He is survived by a son and two daughters of his first marriage.
Air Commodore Peter Scott, born February 27 1924, died February 24 2012