Written by : Charlie Brown
Published : January 23, 2021
Before I continue with the story itself, I also ought to explain a little bit more about the organisation of RAF fast jet operations. All of the drivers, navigators and groundcrew are separated into Squadrons, squadrons are a bit like groups of football fans, they each have their own badge and colours, they also shout and sing about themselves and call the other squadrons wankers, especially when they’re pissed. The groundcrew on each squadron is usually split into 2 separate shifts; there is the shift that you work on and there is the ‘other’ shift. Your shift is efficient and does all the real work, the other shift, that can also be referred to as ‘shit shift’ always leave jobs on the jets that they should have done for your shift to do the following day, they also make a mess that you end up having to clean up and they are shit at drinking. If you get moved onto the other shift for any reason, you moan and scream and complain for a few weeks, then calm down and start calling your old shift ‘shit shift’ basically the shifts are both exactly the same, this is similarly true for the different squadrons. 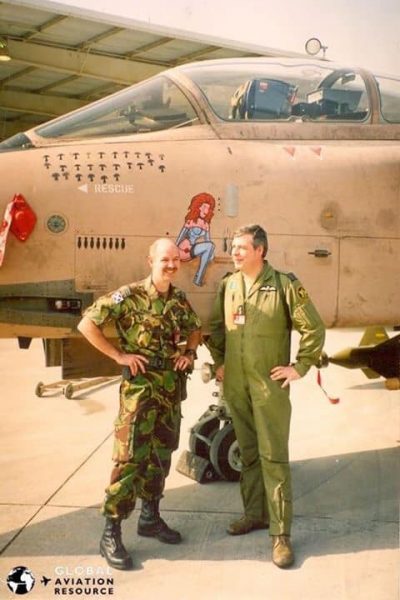 So here we were in Saudi Arabia, but not as a squadron as you might expect, we were deployed as ‘mixed bag’ cocktail of different squadrons, the crews (drivers and navigators) and formations (usually 4 jets) did stick together in squadron groups. The groundcrew was however fully integrated and working hand in hand with the mechanics and technicians from the other squadrons. Even the two shifts seemed to bury the hatchet and team up as one group with one common enemy and that was of course ‘The Management’ the management on every squadron (or group of squadrons?) is a bit like a government. They are pretty piss poor, it doesn’t matter what they do or what they don’t do! It’s wrong and it’s unpopular, especially to the groundcrew at the lower end of the food chain. In actual fact, the management are doing the best they possibly can with the resources and information that they’ve been given, but admitting that at the time is something that you just don’t do! One difference between the management and a government is that we never voted to put them there! The senior drivers and navigators are sort of management, but in a different kind of way, they are a bit like the House of Lords, if they’re not flying, they sit around napping or dreaming of getting a medal and huge pension. The leader of the groundcrew is called the SEngO, this is an acronym, the RAF loves acronyms, probably because it is one itself. SEngO means ‘Senior Engineering Officer’ There are shouty SEngOs and there are quiet SEngOs, ours was definitely a shouty one! Shouty ones are preferable to quiet ones for several reasons; You can hear them coming and either hide or pretend to be busy, also if they shout, there’s a good chance that they bite too, so you are warned in advance, a bit like with a dog, sometimes they shout because they actually know what they’re talking about too! Our SEngO was also Scottish, Scottish people are usually more shouty than normal people too, I think that’s an evolutionary thing as shouting makes you warm up which is handy if you live in a frozen wasteland. Quiet SEngOs are to be avoided if at all possible, you don’t know where you stand with them and also quiet SEngOs often use very loud shouty people called Warrant Officers to do their shouting for them! It should be noted that there are also JEngOs and BEngOs, these are Junior and Baby Engineering Officers respectively, they are management, but it’s not uncommon to see them getting shouted at and sometimes they have their permission to make decisions removed from them. I must now add a serious note, everyone mentioned so far came under the control of one person, the Boss. In this case it was Jerry, our own squadron’s boss, there were 3 other squadron bosses at Dhahran with us, but Jerry was in overall command of the unit. Jerry was a driver, he’d flown Vulcans and Buccaneers before moving onto Tornados and was a very cool, calm leader and highly respected by everyone who knew him. Sadly, Jerry passed away earlier this year after a long illness and has left a huge hole in the ‘Class of 1991’ Story to be continued, later today........ (I’m writing it ‘off the cuff’ and it’s expanding) I’ve also got very little else to do at the moment! Photos (in order) The SEngO (Les) and the ‘Boss’ (Jerry) with Dhahran Annie (note SEngO is wearing a Scottish badge on his arm, this is probably to warn deaf people that he’s shouty?) 3 very honest drivers pictured writing lists of all the things in the jets that they have just broken whilst flying them. The navigator in the middle is probably looking happy because he didn’t break anything (or at least he remembered to switch it all on?) The other navigator staring into space is probably thinking about playing golf! 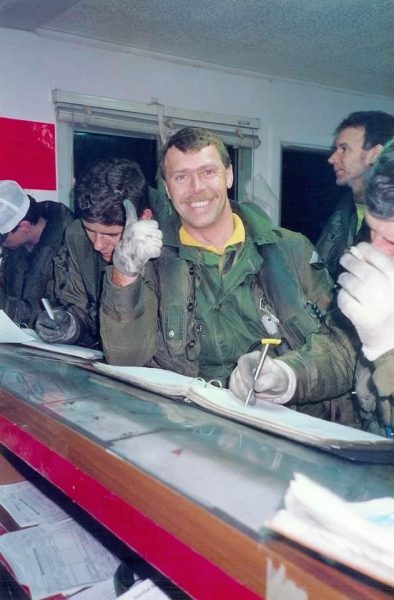