Written by : Charlie Brown
Published : January 21, 2021
Armourers are the guys who fit the bombs to the jets, in peacetime the jets often come back with bombs still fitted and the armourers have to remove them again, so in wartime the bombs get dropped on the enemy and armourers only work half as much as everybody else! Armourers think that they are more important than other groundcrew and that the RAF would just be a flying club without them, in actual fact without the jets, the armourers would just have a pile of bombs and rockets which isn’t much use at all. A pile of bombs and rockets is called a Dump, this is a fitting name for where armourers live. I must add that armourers also maintain the jet’s Ejection Seats, these are what the driver and navigator sit on. If the driver or groundcrew make a big mistake they use the ejection seat to jump out of the jet! Ejection seats only have to work once, a bit like ring pulls on cans of beer or fire extinguishers. When the ejection seat is used, the driver and navigator buy the armourers lots of beer, but when everything else on the jets works properly almost every time they fly it, that is just normal. The armourers don’t really fix ejection seats, if an ejection seat doesn’t work, nobody reports it, they also don’t get any beer bought for them. As you will have gathered, I’m trying to tell this story with some humour, but the bottom line is that this war was a very serious business and people were going die on both sides, some of them would be guys that we knew, others would be faceless individuals at places on the other side of a line on a map. The jet that I was looking after was identified as ‘Delta Alpha’ (DA was the code painted on it’s fin) we had named it ‘Dhahran Annie’ and it had suitable artwork on its nose. In the early hours of 20 January, my driver and his Nav ‘Colin & Chris’ were to be part of a 7 jet package briefed to attack the airbase at Jalibah South East in southern Iraq from our base at Dhahran in Eastern Saudi Arabia, our missions were in the role of Offensive Counter Air ‘OCA’ basically to destroy Iraq’s ability to fight in the air. The jets were armed with 5 x 1000lbs bombs each, these were ‘dumb’ bombs that were ballistically guided as opposed to the precision guided bombs that we were using later in the war. They also had 2 x Sidewinder heat seeking missiles and a couple of 27mm canons. The sidewinders were for self defence, the canons were loaded, but there weren’t many situations that they would be much use. When a crew take a jet to war, they trust that jet with their lives, so therefore they must trust the groundcrew that maintain and prepare the jet for them. Joking aside, the bond between groundcrew and aircrew on live operations is very strong and although we are the guys left on the ground after waving them off, we are with them every inch of the way and are not happy until they have returned safely, even if they’ve broken the jet! We strap them into their ejection seats, ensure they are fully connected to the jet’s systems and then make sure that the whole thing is operating correctly by monitoring it throughout its start-up process and make it ready to go to war in full working order. Story to be continued tomorrow........ (it’s 30th Anniversary) Photos (in order) 2 very fine examples of armourers (under a jet with 5 x 1000lbs ‘dumb’ bombs) another very fine armourer concentrating very hard (possibly trying to remember to breath?) precision guided bomb in this picture Normal groundcrew monitoring critical systems on the jet during a launch (or possibly reading his book?) 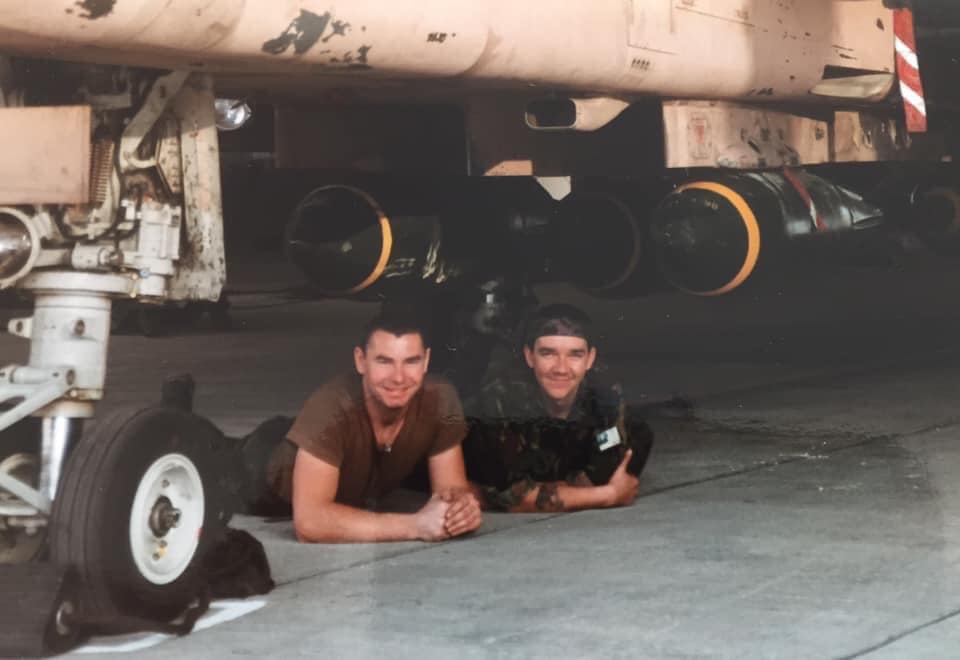 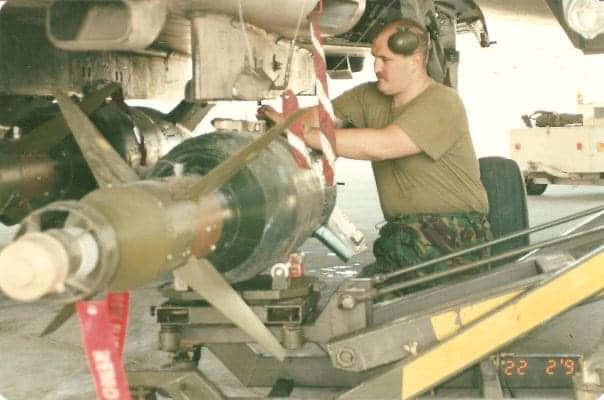