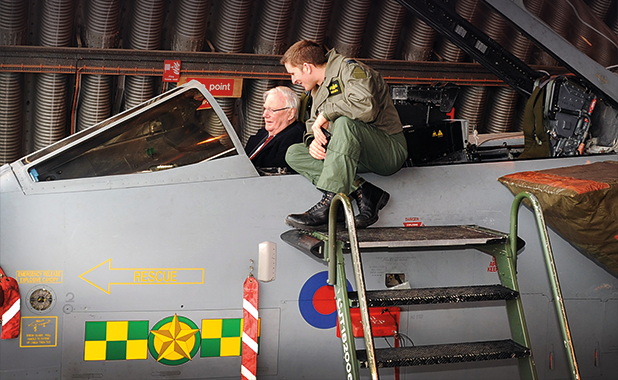 31 Squadron recently hosted a WWII Veteran, Leo Fenning, and showed him around a Tornado GR4 to see how things had changed since his days in the Royal Air Force.

Leo Fenning had joined the RAF in 1943 at the tender age of 18 and found himself working briefly on the Stirling aircraft before becoming a Flight Engineer on the Lancaster serving with 218 Squadron.

Based at RAF Chedburgh in Suffolk he flew 30 missions during the war finishing off with Op MANNA dropping food to the Dutch troops on the ground at the end of the second World War. Mr Fenning sat in the cockpit of the Tornado GR4 and said he â€œwouldnâ€™t want to be in there any longer than five minutes!â€ This was a great opportunity for the aircrew of 31 Squadron to meet with a veteran of the 2nd World War and share the differences and similarities of life in the RAF from the 1940â€™s to present day.